The first fire station was located on the first floor of city Hall at 24 E. Broadway St. The Demand for more room and office space left the alternative of providing accommodations elsewhere. Thus, the big Quartz Street Station became Headquarters instead of a secondary station. In 1889, the Fire Department purchased a lot and began building a Hose House 20’ x 50’ in size. It was located in back of the Kinsbury Block on Main Street. It had all the modern improvements and room for 10 men who would be stationed there around the clock. It was later replaced by the Quartz Street Station.

Quartz Street Station, known as “Number One”, served as Headquarters for the Fire Chief and 14 men. It was a 4 bay station and besides its extensive equipment, it was said to have a vast Library of fire literature. It served as Headquarters until1976. Present day, it houses the Butte-Silver Bow Public Archives and is said to be haunted by Louisa Sanger, widow of Chief Peter Sanger.

The Arizona Street Station was known as “Number Two”. It was Headquarters to the Assistant Chief and 10 men. Its location was selected as affording quick and easy access to the railroad depots and the warehouse district. It was closed in 1933.

This station was built to serve the area west of Missoula Gulch (Butte’s West Side), which was growing rapidly at the time. It had 4 men on duty at all times. Because of a city economical crunch in 1915, it was closed.

This was originally an unmanned station. It had apparatus to serve the South Butte area. In 1912, the station was manned and provided fire protection for the rapidly growing “Flats”. It was remodeled in 1975 into a 3 bay station and currently covers a large area of “the Flats” (South Butte). It is today known as “Number Two” and has 2 pumpers and a rescue unit.

“There are battles to be fought other than those waged upon blood stained fields where armed men contend for glory or more material things; but battles in which also men stand every hour face to face with death, as does the soldier. There are victories to be won that find small place in history, perhaps no place at all, but yet as glorious as any that ever wrested vast possessions from the defeated. There are soldiers whose weapons are never trained against their fellowmen, but are always directed in a common cause against a common enemy. 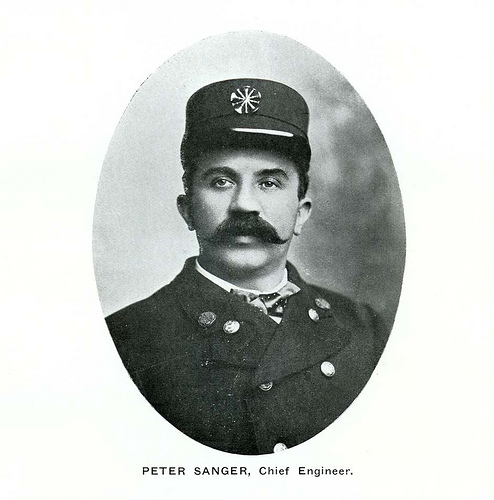 * Excerpted from the introductory page of Souvenir History of the Butte Fire Department by Peter Sanger, Chief Engineer. Published by The People’s Publishing Co. 1901