Brief History of the Great Disaster of 1895 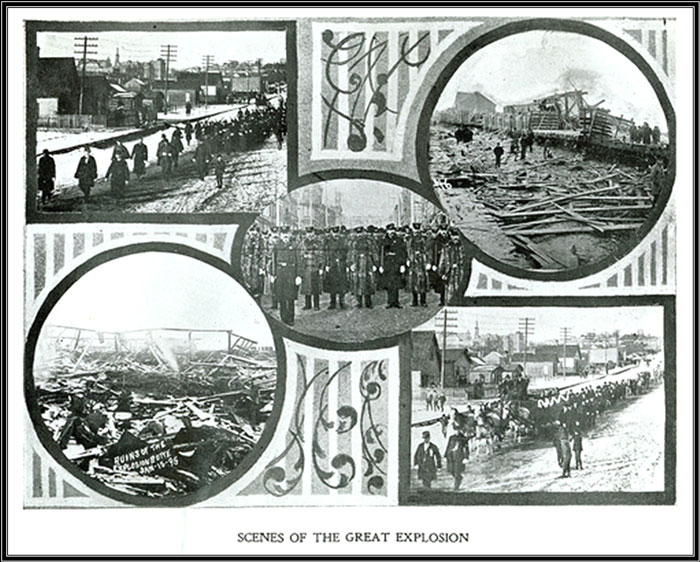 It was about five minutes before ten o’clock on the night of January 15, 1895, that an alarm of a fire was burning in what has since come to be known as “Fateful Box 72”, located at the corner of Utah Avenue and Iron Street. This was Butte’s warehouse district. Among the warehouses were those of Kenyon-Connell Commercial Company and the Butte Hardware Company. Some railroad men in charge of switch engines first saw smoke coming from the roof of the Kenyon-Connell building. Policeman, James Steinborn, who was on duty in that part of the city, turned in the fire alarm from Box 72.

The apparatus and the men from the Central Fire Station, in City Hall, responded to the alarm. It was the last call for all but 2 of them.

When they reached the scene of the fire, the flames were bursting through the roof or the warehouse. John Flannery, the plugman of the crew, made the plug at the hydrant near the Montana Central Passenger Depot as his duty required him to do. The hose cart and hook and ladder continued on until they reached the warehouses. The nozzle end of the hose was handed over to the Pipeman and Driver, Dave Magee, who took his team a few yards further on, where he stopped and proceeded to blanket the horses, as it was apparent the fire would last for some time.

The hook and ladder apparatus was stopped near the northeast corner of the burning building. Despite the almost general slaughter that was to follow, there were some survivors who remembered the positions of the men at the time of the explosion. Chief A.D. Cameron had given the order to turn on the water and was standing at the hose and straightening out the kinks. 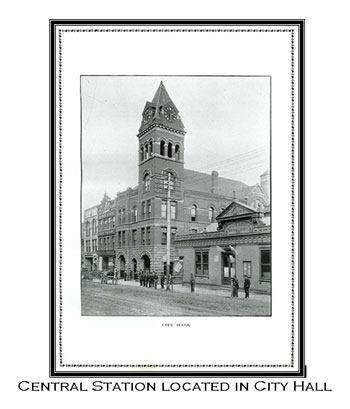 Assistant Chief Sloan, axe in hand, was trying to make an opening through the corrugated iron on the northwest corner of the building where the fire appeared to be. Close to the door on the north side were Pipemen Ash and Mose, holding the nozzle and waiting for the stream to be turned on. Near them was Pipeman Ed Sloan, ready for any work that was required. Norling and Fifer were at the hook and ladder apparatus ready to get the ladders out. Part-Paid members of the department; Bowman, Brokaw, Burns, Copeland, Deloughery, and Nolan were near the hose wagon. 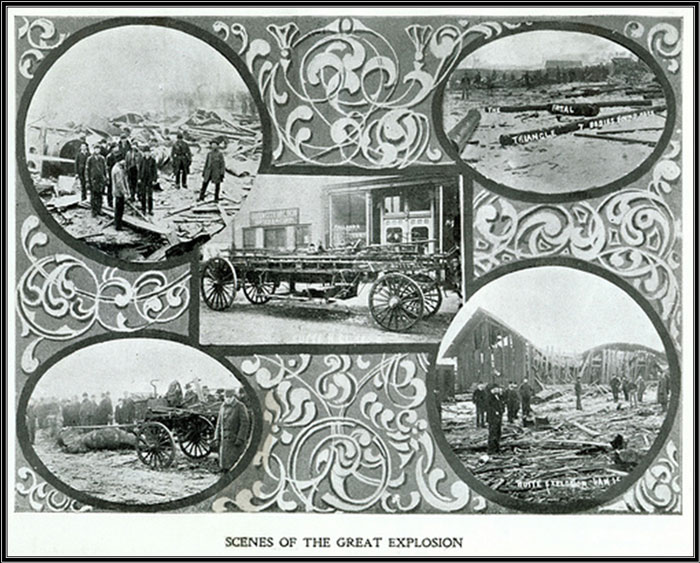 The water had just been turned on when there was a slight explosion – many say it was not much more than a puff – inside the building. Flames and pieces of burning wood were thrown up through the opening already burned in the roof. For a moment, the firemen drew off. Assuming that was the end of anything of that sort, and ignorant of the immense quantity of high explosives stored in the warehouse, they returned almost immediately to their task.

Then happened the first, great, death-dealing explosion. The exact time of its occurrence is given as eight minutes after ten – just thirteen minutes from the sounding of the alarm. The shock and the sound can better be imagined than described. The explosion was so violent that people blocks away were stunned and others over a mile away felt the force of it. How much dynamite had been inside the Kenyon-Connell warehouse has never been accurately ascertained, but the quantity must have been enormous.

Immediately, people came from all parts of the city to assist in the work of removing the dead and injured. While the recovery effort was going on, the second great explosion occurred. It came from the warehouse of the Butte Hardware Company. That warehouse had been partially set afire with the first explosion. The scenes of the previous explosion were repeated in all of their horror. It is the opinion of many that the loss of life by the second explosion was greater than that of the first due to the large crowd that had assembled by this time. The official report placed the list of the dead at 57. Some believe it to be higher. 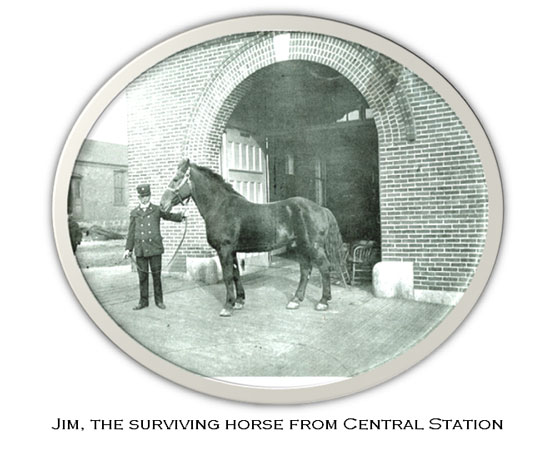 The only surviving firemen were the Plugman, John Flannery, who had remained at his post as he was required to do, and Dave Magee, the driver of the hose cart, with horses "Nig" and "Prince". Magee was standing alongside the horses placing blankets on them. Luckily for Magee, the horses stood between him and the blast at the warehouse. One of the horses was killed instantly and fell on Magee, injuring him severely. "Jim" the horse, which was pulling the hook and ladder wagon survived, becoming one of the landmarks of the department. 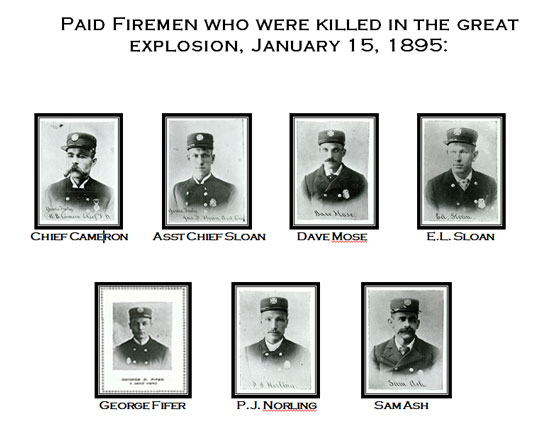 Butte paid high tribute to the brave men who met death in the line of duty. Their funeral was a most dignified and stately event and the occasion was made a general holiday of grief and mourning.